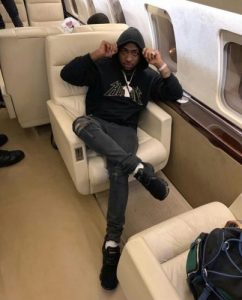 Davido has revealed he will be going phoneless for the next one month and probably till he puts finishing touches to his album.

The singer made this announcement via his Instagram story this morning to the disappointment of his many teeming fans who have always been kept entertained and informed by the “Baddest” himself.

The Baddest Is Going Phone-less For The Next One Month Trying To Put Final touches On The Album ?? .. What’s Akara Without Groundnut Oil ????? IG will never be The Same Without The Baddest ..

Davido has been in the news constantly for some days now, thanks to the public show of display of love with his girlfriend and also as a result of the fifteen mobile phones he gave out to his fans on Twitter yesterday.

It has broken the hearts of many as it is Davido who makes their visits to social media worthwhile with his very entertaining and informative posts.

The singer has revealed his album will be dropping in the summer, so it is only very reasonable to allow the OBO some time to put finishing touches to his album.