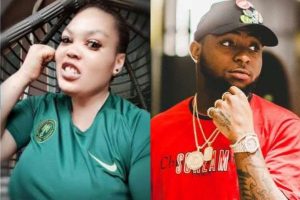 Fela’s daughter; Motunrayo Anikulapo-Kuti, has expressed her disappointment at an Instagram user who said Davido is a better artiste than Fela.

The Instagram user by name Efe Kpokpogri through his Instagram account; @officialefe opined that is a wrong statement to say Fela is better than Davido rather, it is only appropriate to say otherwise. He wrote; “They say Fela is better than Davido. That’s a lie. Davido is better.” On seeing the comment; Fela’s daughter Motunrayo quickly cautioned the user as she also expressed her disappointment at such a ridiculous statement. She wrote; “@officialefe u disappoint me, thank God i unfollowed you a long time ago. U should do the same.”

Motunrayo is popular for having called out Davido in the past. She sometime last year blasted the DMW boss for lack of respect shown towards her when they encountered each other in shrine last year. She said;

“There was a time he came to Afrikan Shrine and sat on my chair; I told him he was sitting on my chair that I was older than him with more than 8 years, that, he should get up for me. I advised him not to think that because he’s Davido he can just come and sit on my chair. He eventually stood up though.”

“I don’t think Davido is a good artiste, I don’t like him. I’ve never related to his songs because he usually sings about girls, love, money and I’m not interested in that kind of music. I want music that would give me intelligence, music that would make me feel okay when I’m in a particular situation, not songs that would be telling me about a woman, a gold digger, an expensive shoe, accessory or whatever.”