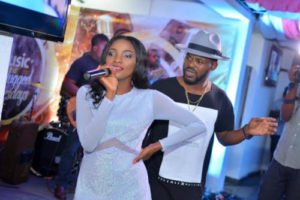 Simi comes through with a banging single titled “Mind Your Bizness“. She taps on her male bestie Falz to deliver this topnotch record.

Simi is ready to start a phase after the success release of “Simisola” album. The new phase is the introduction of her new album tagged “Omo Charlie Champagne” which will be out on the 19th of April, 2019.

This record “Mind Your Bizness” is off her incoming album. Simi sends warning to nosy people, busy bodies to mind their business, stop the gossip and backbiting. Falz comes in to share his own side too, people asking him why he didn’t marry Simi and all.

Listen and Enjoy below while we “Mind Our Bizness” Exclusively on Ariyabase Media.