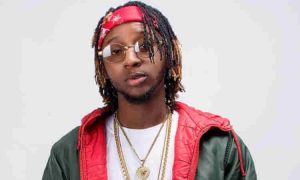 Nigerian rapper, Yung6ix has once again denied the allegations that he is a member of the popular dreaded secret cult ‘Aye'(Axe men) Confraternity.

It would be worthy to note that Yung6ix was accused a few years of being a cultist when he was pictured doing the confraternity’s handshake with a fellow young man in his 2017 “No Favours” music video.

The video garnered a lot of responses online and several fans were not too pleased with the rapper. A Twitter user reacted to the video as he tweeted “I just saw No Favours video so @yungsix is a birdman. Eiye for the matter.. Wawuu issokay“

Yung6ix wasted no time in defending himself saying that he is not a cultist. He wrote “I’m not a cultist, that was a label handshake”

However, this time around, the accusation becomes more solid as the rapper is seen performing at what seems to be an anniversary event organized by the members of the confraternity. He responded to the recent allegations stating that he doesn’t mind performing anywhere even in Pakistan and would never reject an opportunity to perform as long as the pay is good.

In his words “Person nor fit perform for him fans again ? Lol if them book me for Pakistan and the money is good I’ll damn sure perform between the war. Money over opinions. Will never turn down an opportunity to connect with my true fans. If you know you know.”